Even when you are suffering from PMR or GCA, it is important to maintain your level of mobility and fitness as well as you can. This can be a challenge, but it can make a big difference to recovery, and it helps us to feel positive.

Many people who develop PMR or GCA have been very active before becoming unwell. You may have retired quite recently, and have been looking forward to all the walking, tennis, or golf that you could now do in your free time.  The effect of steroid treatment can be so dramatic that it can be easy to imagine that you can go back to your previous level of physical activity. But we find that almost everyone who does this finds that the next day, they feel pretty rough, with a return of the aching and stiffness. On the helpline we often tell people ‘think of your earlier level of activity or sport, and then think of half of that’.  So in order not to exhaust our bodies, that are already taxed by this underlying illness, if we maintain our activity but realise that we can only do about half of what we did before, this is a reasonable rule-of-thumb for working out what we are capable of.

We have a consultant physiotherapist on our Advisory Panel who gives the following tips:

Think of exercise in terms of a sequence: Stretch, Move, Strengthen (Power), Balance and Rest.

Of these the most important is Rest. Concentrate on getting the best level of sleep you can before engaging in a regime of physical activity. You need rest for your body to recover.  Is your mattress giving you the right support? Try and take a short nap during the day.

Increase your level of physical activity gently. It could be just walking around the house. Many people find swimming particularly good.

If you walk, try to walk at a brisker pace for just a few minutes. This will increase your heart rate and be good for the circulation.

Increase your level of physical activity gently. This could mean just walking around the house, or going for a swim.

What can you do in terms of your diet and nutrition to improve your quality of life and your general health while you are suffering from PMR or GCA?  What foods can help you on the road to recovery? It would be lovely if PMRGCAuk could present a diet sheet or a ‘recipe’ for this, but the fact is that we can’t. Our policy is to use evidence-based information, and unfortunately there is very little scientific evidence for the idea of an ‘anti-inflammatory diet’ that will unlock the secret of recovery. However, many patients have tried different ways of helping themselves through diet, and there are some basic points that we would like everybody to know about. This section is about presenting some facts that are backed up by research, and some bits of good sense that are distilled from experience.  The information here is about generally looking after yourself nutritionally, which is the basis of recovery, rather than a list of foods to eat or to avoid.

While you are on steroids your risk of osteoporosis is higher. You should take a calcium supplement and eat foods rich in calcium, such as green vegetables, sardines and salmon (lower in fat than cheese and dairy!).

Steroids raise the level of glucose in your blood, raising the risk of Type 2 diabetes.  You should try to restrict your intake of refined sugars and starchy foods, such as potatoes, white rice and white bread. This does not mean avoiding carbohydrates altogether! Your body runs on carbs and you need them to fuel your endocrine system, helping your body to re-balance.  Eat good quality protein foods and fruit and vegetables. This will help you keep in shape, inside and outside.

One nutritional adviser suggests that, for older people who are unwell, it might not be a good idea to eat a lot of raw vegetables. Your body may absorb the nutrients more easily from cooked veg. 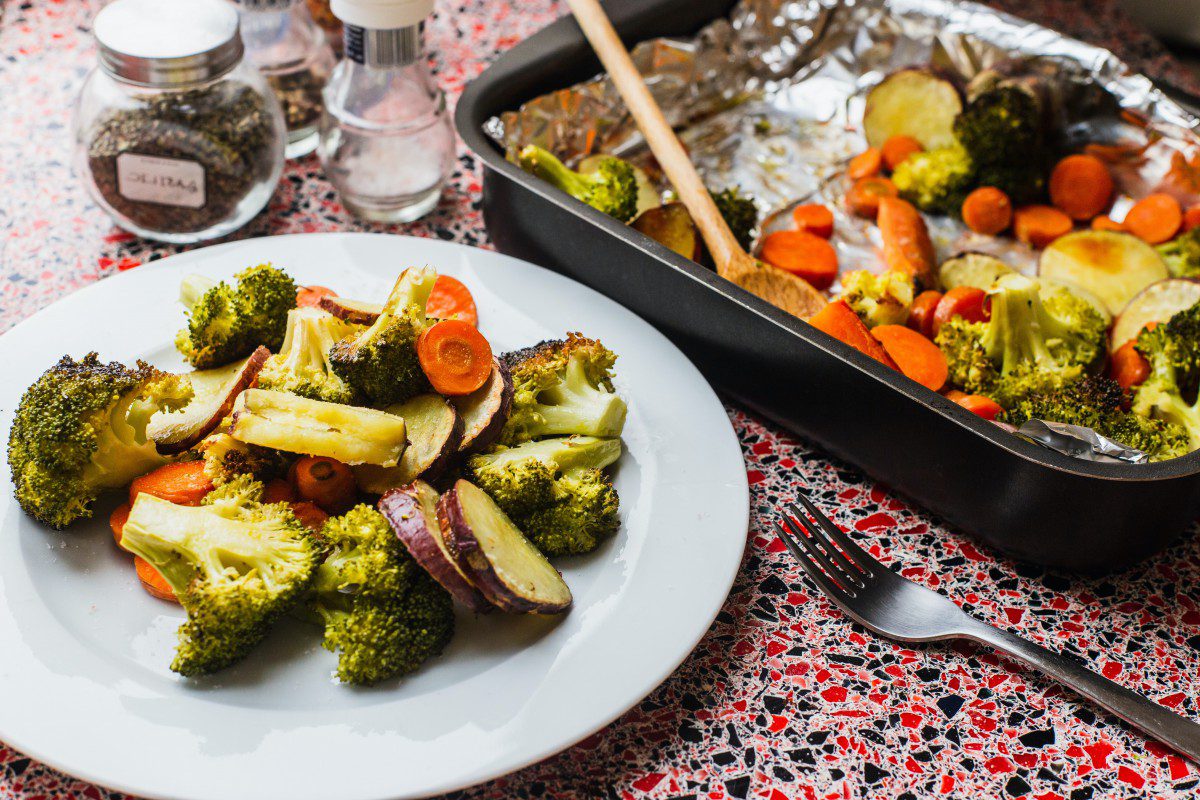 When you have a chronic health condition, it is important to eat often. Don’t skip meals, starve yourself or crash diet in an effort to deal with steroid-related weight gain.

Which foods to eat and avoid

The Mayo Clinic recommends incorporating whole grains, sufficient calcium and vitamin D, as well as low-fat meat. This could help to prevent potential problems such as thinning bones, high blood pressure and diabetes. Several rheumatologists also recommend oily fish such us sardines, herring, trout and wild salmon.  All this adds up to a “low inflammatory diet”.  Some people experiment further with certain foods and substances that are claimed to reduce inflammation in the body.  For example, curcumin, which is a substance in the spice turmeric, was found in experimental conditions to have an effect on the C-reactive protein that is a sign of inflammation in the body.  However, nobody really knows how much of these foods you should eat in a ‘normal diet’ to make a difference.

All of us, not only those with PMR and GCA, should be thinking about how to reduce the amount of processed food we are eating.  Processed food tends to contain some poor quality fats, and refined sugars. Some people go further, and suggest avoiding certain foods, such as dairy.  Others advocate cutting down or cutting out plants from the nightshade family. These include tomatoes, potatoes, aubergines, and peppers.   These plants contain solanine, an alkal oid substance that forms part of the plant’s defence mechanisms. It is suggested that, in excess, this may cause inflammation, muscle spasms, pain and stiffness.  However, we have searched for scientific evidence of this and we haven’t been able to find any. The only reference was in a paper from 1993 referring to inflammation symptoms in livestock that had been eating the leaves and stems of nightshade plants. In contrast, several papers report on anti-inflammatory properties of certain nightshade plants. Tomatoes, aubergines and even potatoes are full of good nutritional value and it is highly unlikely that you would consume enough to cause an ‘excess’ of solanine in the body.  It might be good sense to avoid under- or over-ripe (damaged) fruits and vegetables. Other people claim that red meats can increase inflammation in the body, and suggest sticking to organic free range chicken and fish.

We are all different. So it might be worth your while trying to find out which foods might make you feel worse, and which might make you feel better in yourself.  If you fancy a steak and chips with a nice glass of red wine, we are not going to tell you to avoid it!  Just don’t overdo the chips. Because we have to be led by the evidence, we are not in a position to recommend you spend your money on any special foods or supplements.

This site uses cookies to give you a better experience.

Start your membership today to join our community.